Most people in the community are aware of the recent birth of our son Matthew. I have told many of you about our friend Fr. Matthew Baker, whose recent tragic death prompted our son's name, and I wanted to make this available in a more visible way.

When we were in New York, my family lived directly underneath Fr. Matthew Baker and his family, and they soon came to occupy a central place in our hearts. It was a difficult year for us, and the best of my memories of that time are of sitting on the deck with Fr. Matthew talking about God, the universe, and everything. Our wives also became friends as well, and it did not take long to realize that his wife was in every way his match. They functioned as a remarkably integrated unit. We all shared a great deal in that time. I looked after two of his kids while my wife assisted in the home birth of their fifth child. 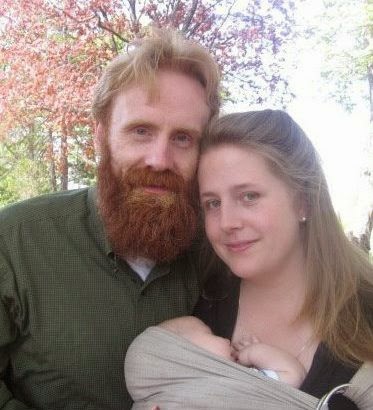 That was nearly four years ago, but we have kept in touch, and our kids (who were very young at the time) still rehearse stories about their children (like “George and the beer bottle”), and from time to time name the Bakers (each of them) in our family prayers. Indeed, recently our kids were begging us to take them to visit the Bakers.
The very next day, after serving vespers at the parish to which he had just been assigned, Fr. Matthew was tragically killed while driving home in a snow storm. Within hours we had been informed by mutual friends. One of his friends said that when he learned the news, he “wanted to scream.” So did I. I didn't scream, but I did weep. Well... sob, is probably more accurate. It has been a great many years since anything has hit me so hard. I felt bereaved personally, of course. I loved the man deeply. Knowing his family, I also felt incredible pain for them. But even more powerfully (and in some ways with even less acceptance) I think I felt the loss to the Church. Like many people I had high hopes for Fr. Matthew. I have often expressed that, but even so I don't think I knew how much hope I had until he died.
It was all the more emotionally complicated for my wife and myself because we were expecting the birth of our fourth child, and signs made me think it was likely to come Sunday night (March 1). This news put a halt to that. Biss' body seemed to go into a holding pattern while we attempted to deal with this blow.
As it happened, our son was born Saturday March 7. Holding him in my arms, the first moment I had a chance to glance at the clock, I realized the services for Fr. Matthew's funeral were about to begin. It is an emotional workout to bury a man you love and welcome another into the world at virtually the same moment.
The news of Fr. Matthew's death soon spread like wildfire on Face book and other social media, and many tributes and contributions poured in.
I will not repeat everything that has been said about him, other than to say that none of what I have read has been in any way exaggerated or whitewashed. His genius was indisputable. He knew more than I thought it was possible to know, but more importantly, he knew what it meant, and how it all connected.  At the same time, he was completely down to earth.  There was nothing "ivory tower" about him.  He may have been a genius and a world class academic, but he was also a solid "man's man."
It is also true that his heart was as large and as open as his mind. He loved and made friends everywhere. Not just Face book “friends,” but people he genuinely cared for and to whom he gave freely of whatever he had.
What has perhaps been mentioned less, is that along with the mind of a genius and an equally expansive heart, Fr. Matthew had the spirit of a warrior. I don't mean he was a political hawk. His war was not against “flesh and blood,” but against spiritual darkness in high places. He had a particular hatred for abuse and mistreatment in the name of spirituality. Against such his anger could burn white hot. Even then, however, his anger always felt clean. There was no malice in it, and it never felt like it was directed at any individual, but rather at the destructive distortion involved. Even while still processing personal pain, neither he nor Katie seemed to want to draw people into disliking anyone, or taking sides against people. One observer points out that he was a “man of strength with the scars to prove it.” I have seen some of those scars, and loved him for it.  Although he was only 37 years old, another calls him "solid, like a gnarled oak tree that withstands the winds of change."  He and Katie were certainly no strangers to suffering, but their pain made them not only stronger, but kinder.
He believed deeply in the power and importance of truth – not so much to be able to prove he was “right” as to point out how truth and error aid or distort how people relate to God, the world, and each other.
He was not perfect, of course, but I delighted in the fact that his shortcomings were as bold and as honest as the rest of him.
Fr. Matthew was a wonderful (if unconventional) father, a fiercely loyal husband and a deeply committed priest. What I found most remarkable about him, however, was not his truly astonishing gifts, but the generous and unflagging use of them. Everything he received from God, he offered back to God, wholeheartedly and unstintingly. At least as impressive to me is the fact that he never seemed to misuse those gifts. His mental powers, quick wit and charisma could easily have been used to support personal pride, undermine “enemies,” gain political advantage or to further his own personal agenda. I never observed any such thing. Even when he was the target of misapplied power, I never saw him use his own powers for anything but good.

In his notes for a sermon he never had a chance to deliver, Fr. Matthew quotes from his own hero, Fr. Georges Florovsky.


“What shall pass from history into eternity? The human person with all its relations, such as friendship and love.”

Father Matthew lived and died virtually penniless, but he passes into the next life one of the wealthiest people I know.

Please give prayerful consideration to contributing to support Presvytera Katherine and the six children Fr. Matthew leaves behind.  It may seem like a lot of money has been raised, but raising six children single-handed is not cheap (even for a woman as industrious and frugal as she is), and that money has to last a long time.

AFTERWORD: I have mentioned the emotional contradiction of Burying one man while welcoming another into the world.  In reality, of course, the "contradiction" is illusory.  When my son was born he left a place that had been growing increasingly restrictive, and which no longer provided room to grow.  He emerged into a vastly larger, brighter and richer environment.  For the Christian, death is precisely the same.  In a sermon delivered only days before his death, Fr. Matthew reminds us that in Lent we "renew our commitment to the task of becoming authentic human beings."  He ended that sermon with these words from St. Ignatius of Antioch, who was writing concerning his impending martyrdom in Rome.  St. Ignatius begs the Christians not to "rescue" him from death.

The pains of birth are upon me. Allow me, my brethren; hinder me not from living, do not wish me to be stillborn… Allow me to imitate the passion of my God …when I shall have arrived there, I shall become a human being (Epist. ad Rom., 6)."

The day our son was born brought us another juxtaposition I think worth mentioning. I have lived much of my life around very intelligent people, and reading books written by even more intelligent people. By nature I am very much oriented to the life of the mind. At the same time, however, I have spent a large chunk of my life loving (and being loved by) people with a wide range of cognitive difficulties. This has given me a growing appreciation for St. Paul the Simple (sometimes called the “simple minded”). St. Paul could not always keep all the details straight (Interrupting a discussion with visitors by asking “who came first, Jesus or the Old Testament Prophets?”, he tried the patience even of St. Anthony the Great), but St. Paul never envied the gifts of others or worried about gifts he didn't have. He simply did what he was given to do, and trusted. His faith enabled him to heal diseases and cast out demons that others could not.
Our son was born on March 7. The day we laid to rest one of the great minds of our generation was also the day we commemorate St. Paul the Simple, so it was only appropriate to give him this name as well. Whether our boy has the mental powers of Fr. Matthew or of St. Paul the Simple does not really matter, so long as he has the character of both. Neither of these men were concerned with gifts they did not have, nor did they take pride in gifts they did have. They simply loved the giver of those gifts and used what they had in the service of God and whoever God sent to them. They both trusted implicitly in the triumph of Christ. May they both pray for my little boy.
Posted by biss at 2:48 AM

thank you for these words. they were so necessary right now.